Before starting this study, take a moment to read James 2:1-7. Although I’ll primarily be using the NIV version for the preparation of this study, you can read from whichever version you prefer.

Favoritism is evil. James doesn’t mince words and I’ll try to do likewise. In our culture, we try to make excuses for favoritism or explain instances where it’s okay. Yet Scripture is clear that there is no room for favoritism or discrimination in the Church.

Let’s be honest: when we’re the favored ones, we love it. When I was younger, my grandma was not secretive about her favoritism toward her two sons’ oldest children. “Oldest children are just special,” she’d say (as someone who was also an oldest child).

I was the oldest and I loved this favor I received. In fact, as an outgoing rule follower, I often felt favored by the adults in my life. It felt good to me… and in my selfishness, I didn’t think very much about what it felt to be one of the people on the outside.

My freshman year of high school, though, I ended up in a class with a teacher who could not hide his disdain for me. My family had just moved from out of state, and what was a freshman course in Ohio was a junior course in California. “I don’t teach freshmen,” this teacher said, horrified that I was in his class.

I won’t go into the ugly details. But I will share this: I was very hurt by the fact this teacher had decided, based on my year in school, that I wasn’t worth his time. I worked so hard in his class, only for him to ignore me entirely.

How Favoritism Corrupts the Church 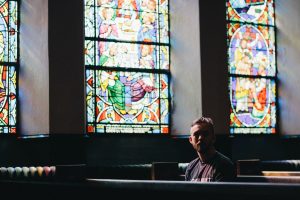 We like to think that favoritism will make the favored person feel good. After all, it’s not too hard for us to imagine this example James gives. When we welcome a new person into the church, it’s good for us to offer them a nice seat and a taste of our hospitality. For the favored person, the experience is great!

But when our kindness to one person comes at the expense of another person, it isn’t kindness at all. This is the evil of favoritism: we decide who will and will not get our favor. In the process, we hurt the people we’ve deemed “less than.”

I heard a pastor recently share about how one time a situation much like James describes happened in his own church. A man who looked a little rough around the edges (by middle class, American Christian standards, at least) came into the church. He was greeted by the greeters, then took his seat.

After him, a new family arrived. The greeters enthusiastically welcomed the well-dressed family in, making sure they had a great seat. When they later told their pastor about how great it was to have such a good family, the pastor asked them about the gentleman who arrived before them. Where was his warm welcome?

When we judge on appearance or other superficial measures, we fail to see what God is doing in our midst. If we allow favoritism to color our Christian communities, we “become judges with evil thoughts” (verse 4).

The Poor and the Rich

The comparison between the poor and the rich is one that appears over and over in James. Here he picks up the theme again, connecting it to this idea of favoritism. He reminds the Church that God has chosen the poor and the lowly, while the rich are the ones exploiting others, engaging in frivolous lawsuits, and blaspheming God’s name (verses 6-7).

God’s standards are radically different from the world’s standards. There is evidence within James’ letter and from the historical record to suggest that the exploitation of the poor was a prevalent problem for believers in the early church. Rich Christians were still exploiting others, living worldly lives. And unfortunately, the world noticed.

God has selected the people who are poor in the eyes of the world to be rich in their faith and to inherit God’s kingdom (verse 5). This statement reminds us of the words of Jesus in the Sermon on the Mount, when he taught his followers about who is blessed in God’s kingdom (Matthew 5:3-12).

If we truly believe that God can and does use anyone, we cannot justify our uneven and unfair treatment of others. When we show favoritism to those the world calls important, we overlook what God is doing in the most unlikely of people.

Have you been showing favoritism? No matter how good your intentions are, this is something for each of us to consider today. In light of this passage and the stirrings you may feel in your spirit as you read, God may be calling you to repentance. What will your life look like when you’re freed from the sin of favoritism?